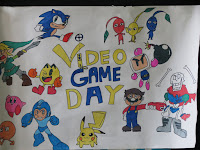 Today was the student favorite "Game Day," where each child enjoyed playing their favorite games. Every student was allowed to bring in their own video games, board games, or cards to play with their friends. We provided a PS4, Wii, and Xbox One for the children to play upon completing a Video Game review. 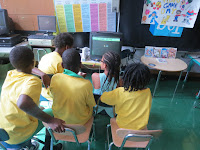 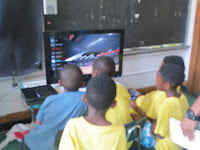 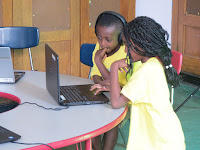 Students had fun playing games such as NBA 2K16, Wii Sports, Super Mario Bros, cards, dominoes, and other board games. 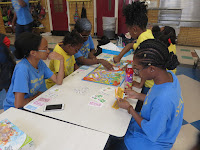 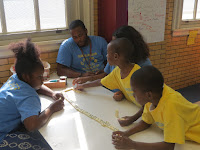 Here of some examples of some brief video game reviews done by students:


Just Dance 3 by Olivia Speller
Just Dance 3 was announced shortly after its prequel, Just Dance 2, was released. Ubisoft released this dancing craze on October 7th, 2011 in North America and October 11th in Europe and Australia.
The most challenging part of this game are the dances, but it’s enjoyable to play.

Fantasy Life by Faith Grinion
You, a normal citizen of Castele, Reveria, are faced with a dilemma that could change the world as we know it; the sky is breaking apart, causing 2 separate worlds to collide. It’s up to you, your friend Butterfly, a few allies, and your Life decisions to save Reveria. You can choose from 12 different Life classes, learning the ways of the sword, wand, pickaxe, frying pan, etc.
The most challenging part would have to be beating the final quest in all the Life classes.

New Super Mario Bros. Wii by John Fentress
This game is fun because it is about saving Princess Peach from Bowser. Everyone loves Mario. He has multiple items, including the ice flower, fire flower, star, red mushroom, mini mushroom, flying mushroom, 1-Up, and penguin.
The hardest part would be defeating Bowser when he is giant. He can spit larger fireballs and the lava under you is rising up.

NBA 2K17 by Gavin Johnston
NBA 2K17 is a fun game involving new and old basketball stars.  It allows people to battle head to head.
The most challenging part of the game is story mode.