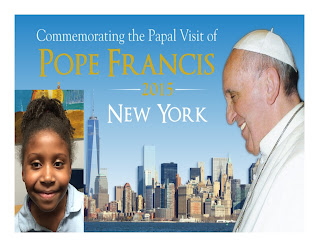 “Pope Francis is the leading global voice on issues of social justice and income inequality, and New Yorkers from all backgrounds will be tremendously humbled and honored to hear his message right here in our city later this year."

This year Pope Francis made his first visit to the great Empire City. His presence had a big impact on the people of New York City regardless of culture or faith.  Pope Francis attended a multi-religious service at the 9/11 Memorial and held mass at Madison Square Garden.

Pope Francis was born December 17,  1930. He is the 266th pope and current pope of the Catholic church. He received his education from the Milltown Institute of Theology and Physiology. His parents are Mario Jose Berglio and Regina Mario Sivori Beglio.  - Paige Hall, 4th Grade